The Pitfalls of Coding your Own Rules (Part 1) – FundApps

Home » The Pitfalls of Coding your Own Rules (Part 1) – FundApps

The Pitfalls of Coding your Own Rules (Part 1) – FundApps

Falling behind the pace of regulatory change.

Prior to joining FundApps in 2014, before “RegTech” was a thing, I noticed that it was commonplace for asset managers, banks, and other holders of financial instruments to buy expensive, on-premise compliance software and hire compliance analysts, legal staff, and IT professionals with specialised knowledge of how to code these very specific systems. In fact, many financial institutions seemed happy to maintain the status-quo, partly because almost all of the associated costs were hidden! Multi-year implementation fees were added to already high upgrade costs just to ensure firms could keep up. Compliance monitoring contractors were brought in at high rates to ensure that changes in risk guidelines and regulations were reflected accurately and to train permanent compliance staff to use a new system. The cycle repeated every few years when a shiny, new version of the software was released. 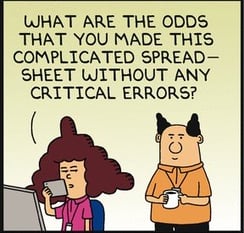 It was either that, or companies employed the risky strategy of using Excel to monitor complex disclosure obligations where errors could result in massive fines and reputational damage.

Here at FundApps, we believe in the power of cloud software to allow compliance officers to benefit from a shared set of compliance rules. We’d like to share some of the major pitfalls to either purchasing a compliance system and maintaining your own rules, or deciding on a cheaper, but much less robust alternative.

REGULATORY CHANGE AT SHORT (OR NO) NOTICE

The only constant in life is change. Shareholding disclosure, position limit monitoring, and sensitive industry compliance share a common attribute: the underlying regulation can and does change, often without notice. This means that buying software which provides the tools to code rules is only a sliver of what will be needed. Updated regulation will need to be reviewed, interpreted, and coded whilst keeping in mind complicated aspects such as what calculations or thresholds will apply, which asset classes are in scope, which portfolios or entities in your firm to aggregate or not, and the list goes on. Consider if your firm (or a less agile competitor) would be able to deploy the following regulatory changes in time and with accuracy:

In the area of both shareholding disclosure and positions limits, there are a high number of obligations which require up to date, accurate regulatory data. Changes in this official regulatory data can impact your obligations immediately.

A few examples are:

When coding your own rule set, you will invariably spend time, and incur costs monitoring regulatory and exchange websites. Significant resources will be needed to automatically check this data via web crawling, scraping, and mapping to security data, or spent by a team of compliance officers to manually (yes, that dirty word) monitor data. Time spent on such menial tasks means time taken away from focusing on more important compliance tasks – where human judgement is required. Manual checking is also prone to error and introduces key-person risk. In fact, we’ve heard many stories of compliance officers not being able to take a holiday or having to work overtime due to others not being able to cover their work in such cases.

I hope I’ve shed some light on some of the challenges the compliance community faces with regards to regulatory interpretation and rule coding. In the next part of this two-part series we will be investigating a few more areas where an isolated and outdated approach to compliance monitoring may not be sufficient. We will also look at how the industry is solving such problems.

Don’t let the pitfalls of coding your own compliance rules get you down any longer! Book a demo to see our automated services in action.

We Need a Renewed Focus on Goal 5: Gender Equality

Is keeping up changes in cryptocurrency making your head spin?

Investing in compliance technology no matter the size of your business

NLP: A Better Way to Nowcast Macro and Commodities